That last mile and the old man overtake 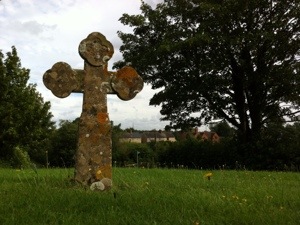 After the brief summer in March, I was unable to get out on the bike much between May and August because of the rain, and because of being away. I haven’t quite reached the stage of taking my bike to France with me, because of not being in the same location for the whole time. Maybe next year.

This year, I really didn’t get out much before the summer holiday began, never got to the stage where I started to feel fitter and able to push harder. So it felt like starting from scratch when we got back from France, but I have managed to do quite well, getting out almost every day (apart from days when I was sort-of-fasting or it really was chucking it with rain). I’ve even – gulp – stopped worrying too much about the wind, which was always a feeble excuse for not going out.

For about three weeks, I’ve been doing about 60-70 miles a week (good for me), and I’ve shed a couple of kilos, which has been like getting a new, much more expensive, bike. There’s just that bit less inertia when you’re going up hill, but it is noticeable.

So I’m 49, still carrying too much weight for a good power-weight ratio, and I’ve been struggling with not so much the strength in my legs as the aching of my hips, back, and feet. I *think* I’ve sorted the foot pain problem by swapping from Shimano shoes to Specialized, and the back pain is not forcing me to stop halfway round anymore. Slowly getting better, then, but I still have a gumption trap on the last mile of my circuit(s).

It doesn’t matter which way I go around, clockwise or anti-, because there’s always a bit of a climb at the end. If I weighed two or three kilos less, I might laugh in the face of this climb, but the combination of aches and pains and slightly wobbly legs always feels like hitting a wall. Most of the time, I seem to be going the opposite way around to most of the other cyclists I encounter, but occasionally I suffer the humiliation of an overtake – and this always happens in the last mile, when I seem to be cycling through treacle.

Coming through Leckhamsted, past the old church, my legs usually feel strong. The road begins to incline, and I’m usually feeling good. It gets steeper, I stand, and I still feel okay. But then there’s a right turn, and suddenly, I’ve got nothing left. It’s always straight after the right turn. The road’s not even that steep, but I struggle up in the granny gear, and then there’s a bit of relief followed by a left turn and it does get steeper for a minute, and by then I’m practically going backwards.

I know it’s psychological rather than physical, but it still feels real.

I don’t mind so much if someone who is obviously 25 years younger than me overtakes. That, you expect. But when a white haired old man overtakes you, you know you’re in trouble.

Thankfully, it’s only happened the once this summer. I’ve even managed to overtake a couple of people – admittedly on clunky and heavy-looking bikes, but still. Small victories.