Some bits about biking 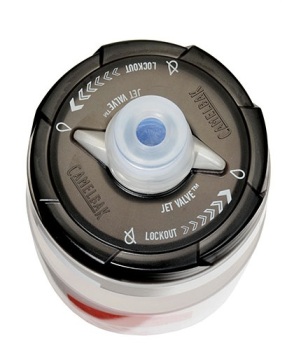 Now the weather is finally warming up a bit (my car reported 13.5°C this afternoon), I’ve managed to get out on the bike a few times. Today I dropped a layer, broke out the 3/4 bib shorts instead of the winter tights and dropped the full-finger gloves. Feeling lighter, I managed a circuit in weak spring sunshine. With just a degree or two more, it would have been perfect. As it was, the wind blowing across the exposed fields (usually displaying rape flowers by this time, I think) was a bit chilly.

Before this last weekend, my previous outing on the bike had been back in March, before I had a minor operation that would have prevented me trying to cycle for at least a fortnight. As it was, the day of the operation was the last sunny day before the winter sneaked back for an extra month. In the meantime, I’ve been preparing for what I’m planning to be my most ambitious season yet with a few bits and pieces.

First up, I got a new water bottle. I’ve been worried for a while that pulling up the stopper on my bidon with my teeth was risky, given the amount of bridgework/crowns I’ve got in my mouth. They made a lot of fuss about this at the hospital, too. Just as I will never, ever, eat Carambar again, I’m thinking pulling up a stopper with my teeth, especially when I’m breathing hard and clumsy, is a recipe for disaster. So I picked up a Camelback bidon with a self-sealing valve, which can be left always-open and which you just squeeze to squirt (careful) on a ride. It’s pretty good, I think. Slightly more than the cheapest plastic bottles, but worth the extra for the teeth peace of mind.

Moving on, I’ve been in the market for a new phone carrier since I “upgraded” to the iPhone 5. So after reading around, I decided to wait for the Quad-Lock Mounting system, and ordered one as soon as they became available in the middle of March. It arrived promptly, but I didn’t get to use it till last weekend. I’m impressed. First of all, the supplied protective case is actually quite attractive and useful. I hadn’t bothered with a case for my iPhone 5, because with the 4 it turned into a spiral of pointless spending – every case I bought left me dissatisfied in some way. But this one is plain, tough, and feels nice to the touch. It also locks onto the bike quickly and securely with a simple quarter turn, and holds the phone without rattles, which is more than can be said of my previous solution.

If you use this referral link, you’ll get 10% discount on a Quad-Lock Mount.

As you can see, the weak link is likely to the be the elastic. The top bit is a splashproof covering which I doubt I’ll ever use since I am the very definition of a fair weather cyclist.

Next up, an item of clothing that I’ve had for a while but only worn more recently. We all know that Rapha cycling gear is over-priced hipster-bait, but it’s also a lot more stylish than standard cycling gear, and well-made. Planning to cycle into work (one of these days, a pipe dream), I want to be able to turn up wearing clothes that will look acceptable to wear for work. As previously discussed, there’s a whole market for this, which suits urban commuters more than it does the likes of me, but still. Maps and dreams, and all that. Two things stopping me from trying to cycle to work. The first is the distance (which for a cycle safe-ish route will be about 20 miles – 40 miles for the day) divided by my fitness. I struggle with achy legs, especially since being on the statins, so I just don’t know about that – considering I’d have to teach a full day in between rather than just collapse on a bed. The second is a more serious concern about safety. The roads in Buckinghamshire are scandalously bad, and the aggression and ignorance of the local drivers is also second to none. People are horribly rude around here – just try visiting Buckingham Tesco -, and on the road there is too much of the mythological, bigoted belief that vehicle excise duty based on emissions is actually called “road tax” and that cyclists – most of whom are car owners too – don’t pay it. 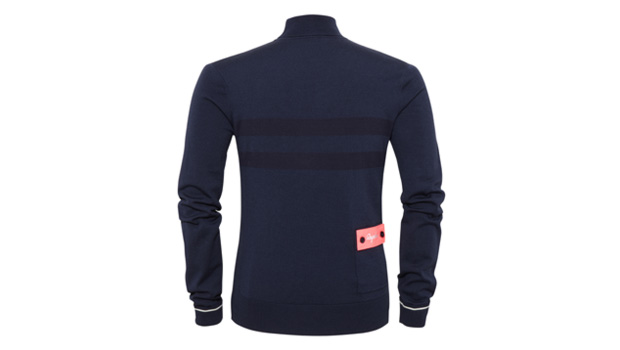 Anyway, I wore my Rapha merino wool roll neck today on the ride, and it was very comfortable. I’ve been rocking the roll neck look all winter, and a lot of them are merino. The material is light and non-itchy, whilst at the same time providing protection against the wind and helping to manage homeostasis quite well.

Finally (yes, there’s more), one of the things that has been bugging me a while is the headphone/earbud problem and cycling. My cheap Sennheiser “sports” earbuds were too uncomfortable. They were an over-ear design, which clashed with my glasses, in combination with cycle helmet. So I was looking for an in-ear solution, and making do with the crappy Apple ones that came with my iPhone 5. I find these are okay, but the cable tends to (a) get tangled and (b) pull down rather uncomfortably on my ears. I mitigated the latter problem with a little clip that I took off the Sennheisers, but I’ve been considering a Bluetooth option.

Now, I bought a cheap set of Bluetooth speakers (in France) in December, and while they are acceptable for the price, the audio quality is not the greatest. There’s a certain amount of squishy distortion, and the Bluetooth connection drops arbitrarily. So I’ve been looking for a while at various Bluetooth earbuds with a jaundiced eye, but finally took the plunge and went for a set of Plantronics BackBeat Go. They’re an in-ear design, connected by a short, flat, cable, which features volume and call controls and a microphone. I almost never take or make phone calls, so that feature is neither here or there. As for the volume control, one of the benefits of having the phone locked on the handlebar stem and wearing cycling gloves is that I can control the phone on its screen.

So it was all about the reliability of the connection and the sound quality. The BackBeat Go buds come with three sizes of eartips (I stuck with the installed medium) which form a good seal with the ear. Pairing was instant and easy. I’d read someone on Amazon complaining that they were too quiet, but I dread to think what that person considered loud enough. The Plantronics are loud enough. In fact I turned the volume on the phone down a bit. 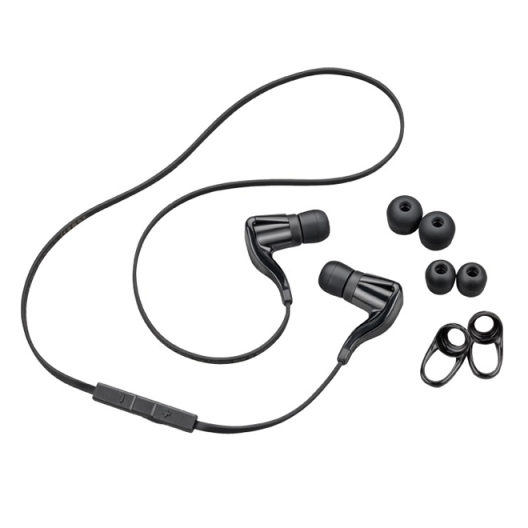 Now, wearing headphones while you cycle is foolish and dangerous. On my riding circuit I meet two or three cars per ride, and I’ve always been wary about drowning out the sound of approaching engines. I’ve adopted a paranoid style, with frequent looks over my shoulder, but still end up jumping out of my skin occasionally. These earbuds form such a good seal that they almost completely cut out the outside world. I’m really not sure I should be riding my bike wearing these. I’ll certainly turn the volume much lower if I ever try to ride to work with them. Apart from anything else, the rush of adrenaline I get every time a vehicle scares the life out of me gives me the Jimmy legs.

Apart from that concern, sound quality is very good. Much better than the Apple earbuds, and certainly much better than I expected, given that they’re wireless. The low end is nicely rounded without being woolly, and the response across the audio spectrum is well balanced. A single charge is supposed to last a few hours – I basically need an hour or two at a time – and they recharge quite quickly via the supplied USB cable – which is pleasingly short and unlikely to get tangled. They’re also comfortable to wear and don’t clash with my glasses.