Summer’s here* and the time is right for barbecuing pizza.

In my greedy dreams of lottery winning extravagance, I have a proper wood-burning pizza oven in the back yard, maybe six or seven of them, but in reality I’ll never be able to justify the expense or afford one.

And in reality, nobody who isn’t running an actual restaurant really needs one.

I’ve got a Weber gas barbecue. I like a gas barbecue because you can light it and be cooking within 10 minutes and so you use it more often. It’s great for cooking things like salmon and other smelly foods without stinking out the kitchen. And if you want smoke, there are loads of solutions, like the wood wrappings or even a grilling plank. A gas barbecue is not a thing that you’ll only use on the very occasional sunny day.

For pizza, you just need a stone. The Weber stone I have is a 1cm thick circle of granite. It just fits onto my rectangular grill. After the dough has proved, you light it up, lower the lid, and let it warm up while you prepare the pizza.

I use Caputo pizza flour, which is available in red and blue varieties. The blue makes for a crispier crust; the red makes a crust that is still crispy, but also has enough softness for a satisfying chew. For three family-sized pizzas, I use 450g of this flour, which needs water to the tune of 65% the weight of the flour. That’s about 293 ml or 293g of water. For pizza, I just use warm tap water, or filtered water slightly warmed in the microwave. You need a sachet of instant yeast (or 2 teaspoons), 1.5 teaspoons of salt, and a teaspoon of sugar.

I put the salt and sugar on one side of the flour and the yeast on the other. I add the water and then mix the dough with a dough hook on my mixer for 5-10 minutes. When it’s nice and stretchy, I pour in a little olive oil, just to stop it sticking to the sides of the bowl. I then cover it in cling film and put the dough in a warm place for about an hour, though 45 minutes is usually long enough on a warm day.

When the dough has risen, it’s time to light the barbecue and let the stone warm up.

Now you gently knock back the sough, divide it into three balls, and set two aside. They will continue to rise a bit. If you have the time, it’s a good idea to wait 15 minutes at this stage to let some air pockets appear in the first dough ball.

Now, sprinkle flour on the side and roll it out. Have a pizza peel ready. I sprinkle flour and/or semolina and/or cornmeal on the peel, which helps the pizza to slide off. Flatten your dough ball with a rolling pin and stretch it out into a circle that’s as big as your peel or just smaller than your pizza stone. You can also stretch it by hand.

Put the stretched dough circle on the peel. Now spread on about 2 generous spoonfulls of tomato sauce. I generally do either one of the following: use unadulterated sundried tomato paste, or a mixture of passata and sundried tomato paste. You don’t want anything too watery. Some people swear by fresh basil: I don’t. I don’t even like it. I think the best herb to sprinkle on at this stage is dried marjoram. Dried, because it has a better flavour.

Now comes the cheese. Yes, you can get expensive little balls of buffalo mozzarella, but for a more reasonable price, a packet of grated mozzarella. 250g for three pizzas: don’t go overboard. Mozzarella is a satisfyingly melty cheese, but has no real flavour. For flavour, mix with a little grated gruyere. Waitrose sell it already grated; nobody else does. You don’t need much, but it really improves the overall flavour.

Now top the cheese with your choice of toppings. I use thin slices of pepper, (sometimes) fresh tomato, pineapple (wife and kids insist), (sometimes) sliced shallot or onion, sliced black olives ( half the pizza only because kids don’t like them), slices of bacon, ham, chorizo, pepperoni, anchovies (fresh from the deli counter is less salty than from a jar), etc. Bacon is better than ham, unless the ham has a really strong flavour. The trick is: not too much of anything, and vary as much as you can within your budget.

You might consider a drizzle of olive oil, but it’s not compulsory.

By now, the pizza stone is hot and the barbecue should be around 200 degrees C. It can get hotter, but doesn’t really need to. Slide the first pizza onto the stone and close the lid. While it’s cooking, get the second pizza ready.

To ring the changes, the middle pizza is a tarte flambée, with (half fat) creme fraiche and more gruyere than mozzarella. Bacon and onion/shallots is all you really need, though you can add other toppings. Slices or dices of (pre-cooked) potato is good, and leave off the pineapple.

The first pizza should be done within ten minutes. The second and third should take less time, as the barbecue gets hotter. Be careful with the third, because the base can burn if you leave it as long as ten minutes.

As you slice it, you’ll get a satisfying crunchy sound. The top will be perfectly cooked, the bottom crispy and (especially with the red Caputo) each slice will be good and chewy. 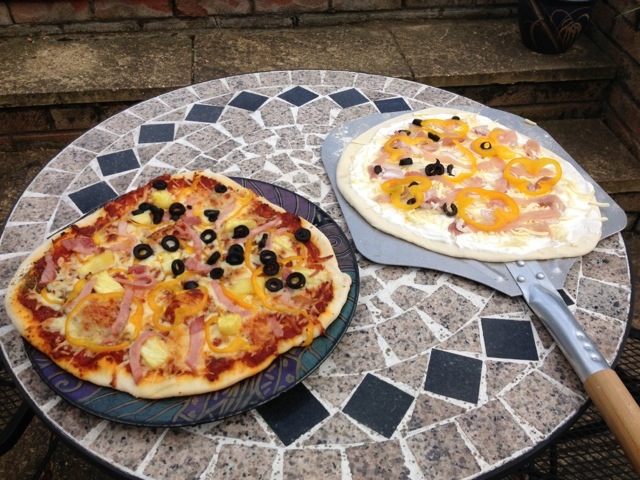