The Hills Have Pies and Headbanging

Just got back from France, where we had a week of mostly rain interspersed with hints of the Spring weather we’ve all been missing. I took my bike and forgot my sunglasses. I hoped the latter forgetfulness would encourage the fates to give us some sunshine, but not much.

The two travelling days were fairly sunny, though there was a moment on the trip down there, where we climbed a steep incline on the road and found ourselves on the other side of a natural geographical boundary. On one side of the pass: bright sunshine; on the other: pissing down.

Such is life in Plancher Bas and now Auxelles Bas, where we have the use of a 200-year-old house left to my mother-in-law by a recently departed aunt. My wife and I, but mainly my wife, have spent the last few holidays (the old lady died last summer) chucking out junk and sprucing the place up. We painted the walls white, in the main. My in-laws installed new windows and shutters and fixed the worst of the dodgy floors, covering the repairs with wood-effect lino. They’ve just ordered a wood-burning stove, too, to be installed in September. This is expensive and a luxury, given that there’s a fairly recent (and noisy) central heating system in the place, but there’s a barn full of 30-year-old oak logs just begging to be burned, so what the hell.

We threw away the straw bedding and got new mattresses. I have the say, the place is really nice now. I’d wish for a couple of additions – things I’d add if I won the lotto – but it is now a fairly decent holiday home, and the sort of place you wouldn’t complain too much about if you rented it. No dishwasher (domage), and a kitchen sink that is both too low and too shallow to be much use, and the bathroom suite is brown: ’nuff said.

Also, and I promise not to complain about this too much: I kept banging my head. 200-year-old French houses were not built with people as tall as 1.85 metres in mind. I do wonder how the German soldiers who occupied the place in the 1939–45 war got on. Perhaps they kept their helmets on. I banged my head every morning on the bedroom door on the way down the stairs. And I banged my head on the stairway overhang at least once a day, on average. The stairs are narrow and the steps are narrow too, so you’re gingerly making your way down and can miss the overhang in your eyeline. In the middle of one night, I was so concerned with avoiding the headbang in the dark that I slipped and slid down the last four steps, wrenching my left shoulder and bruising/scraping my right elbow.

I also banged my head frequently on the living room light fitting, which was donated by my brother-in-law, who previously had it in his living room where, natch, I used to bang my head on it on a regular basis. My wife (1.5 metres tall) positioned the (new) living room couch so that I (1.85 m) would crack my head on it more or less every time I stood up, even if I tried to sit at the end not directly beneath it. So it turns out I don’t stand up in a straight line.

Every time you crack your head, you get a surge of what I suppose is adrenaline in response to the moment of intense pain. You swear (because it helps deal with the pain), but then as the adrenaline fades you get a kind of come-down. After several days of this several times a day I got quite depressed. I think it was chemical, but I was pissed off, especially as my wife didn’t seem to understand how upsetting all this head banging was. The day she cracked her own head under the stairs (while painting a chair) I had to bite my tongue and not say, see? The way you feel right now, I’ve been feeling two or three times a day, every day this week.

So I took the bike. There’s been a psychological black wall in my mind for several years about the hills around Plancher/Auxelles. The Tour de France does pass through occasionally (and did last year). We’re not talking Alps or Pyrenées, but we have got the Ballon d’Alsace, the Planche des Belles Filles, and the foothills (or ballons) of the Vosges mountains. Basically, if you want to go anywhere, you climb. Given that I am 1.85 m tall and a little overweight (still), I have always hated climbing. On my local rides, I go on a 20km loop which involves about 115 metres of climbing in total. To put that in perspective, the 4 km between Plancher Bas and Auxelles Bas involves a 104 metre climb.

Above, you can see the profile of my ride from the house in Auxelles up to the Cascade de St. Antoine in Plancher Les Mines and back again. Below, there’s my usual profile in a ride around the lanes near Buckingham. There’s a bit of a difference, and it’s daunting to one who has a fear of the climbs. 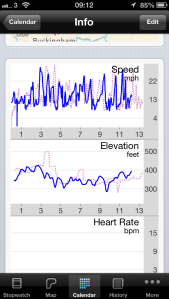 It’s not as if it’s that high or impossible, but it is also about 300-400 metres higher above sea level than I’m used to, and if I want to go anywhere else, I’ve got to climb out of the valley, which means more, and bigger, climbs. Cycling from Plancher Bas up to Plancher Les Mines takes you up 120 metres or so. That’s a ride I’ve managed in the past on a town bike – though I did have to walk up the steep bits a couple of times.

Coming back from the Cascade, 10km all downhill, was stupendously good fun. Not so much of a gradient that you worried about falling off, but enough to give you some assistance in getting up speed. The great thing about the valley of the river Rahin is that you could go on like that all the way to Lure – around 30 km of downhill racing. But then you’d have to go back up again, which would be a bit of a grind.

I worried that I wouldn’t have enough gears on my compact to do much, but that turned out to be okay. I’m still not sure about going further than the valley of the Rahin river. Going up the Planche des Belles Filles, for example, involves some fairly vertical walls, so I wouldn’t try that. My legs were okay, and I could keep up a fairly decent cadence, but I did have trouble getting enough air into my lungs the first time I tried the hill. As you can see from the picture above, it doesn’t even look that steep: it’s just long and straight. On a proper mountain road, you’d be switching back and forth, but on the climb to Auxelles, you’re just looking at a long stretch of tarmac. So, head down, don’t think about it.

The worst bit is the final few metres, when your legs are rubbery and there’s a final really steep few metres up a narrow lane. The first time, I had to get off and walk the last ten metres, but the second time I managed it.

I’ll be taking the bike back in the summer, hoping for better weather, and steeling myself to actually ride up out of the valley.