Putting things together on climate change 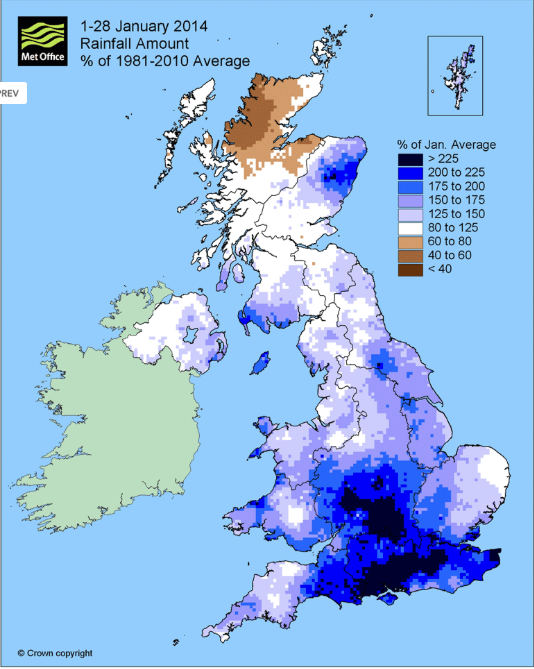 In California they are experiencing a drought – Californians have been asked to cut their water use by 20%. Meanwhile, on this soggy island in the North Atlantic, we have experienced more rain in December and January than even 2012. But who remembers that 2012 was the second-wettest year on record (the wettest was as recently as 2000)? Who, in fact, can remember a time when there was more rain than this? The answer is: nobody. Even if they were 200 years old, they couldn’t remember this much rain.

The rain map shows that some parts of the UK (including the tip of Norfolk, which must come as a relief to them) have had less rain than in an average January. But what’s an average anyway?

What we see is very much a picture of the wet areas of the Earth getting wetter … Those would be the high latitudes like the Arctic and the lower latitudes like the tropics. The middle latitudes in between, those are already the arid and semi-arid parts of the world and they are getting drier.

The problem with Britain and all this rain, of course, is that we don’t have the infrastructure to do anything with all this water. Wouldn’t it be great if we could somehow store it and use it for, you know, agriculture and so on in hotter, drier times? We build housing estates and they just send water into the main sewer system of the town onto which they’re glommed. When it rains too much, the sewer system can’t cope and the rivers can’t cope and the water just spills out all over the place.

People complain about the building on flood plains. To me, this wouldn’t be so bad if the houses were on stilts, or otherwise designed to have their ground floor periodically flooded, but nobody thinks like that. It wouldn’t even be so bad if they put in giant storm drains and somewhere for the water to go, but they’ll never do that, and the nimbys wouldn’t allow it. The real problem is this country’s infrastructure, which has been deliberately and systematically neglected for reasons of ideology and greed.

When Milton Keynes was built, it was created with artificial balancing lakes, designed to take excess water from the large storm drains in times of excessive rain. But Milton Keynes is a child of the 60s and 70s. Since the late 1970s, every public service has been privatised, including the stuff of life (water), and the water companies pay dividends to shareholders instead of building infrastructure.

But it’s not just water companies. Our Victorian railway system is creaking at the seams. The ideologues who have been running the country since 1979 don’t really believe in collective forms of transport, and (of course) the privatised rail companies have no incentive to maintain or build new infrastructure and every reason to fleece as much money as they can from their uncomfortable passengers.

The bigger picture here is that, because we have virtually no manufacturing, the only way for anyone in this country to have a retirement pension is for profits and growth to somehow add value to shares without the means to actually do that. And so profits and growth miraculously appear in spite of the fact that hardly anybody makes anything — at the expense of infrastructure. All that steel that could have been smelted to improve the railways and build trains!? All that concrete that could have been poured to build better sewer systems! All those underground cables that could have been laid, along with fibre optics, cable tv, updated gas mains, and so on.

As to the roads, well. Look around you. This is what 30 years of neglect and under-investment looks like.

Meanwhile, the world they’re creating is turning around and biting back. Drought, floods, record low temperatures, melting icecaps and permafrost. According to some, humanity will be extinct by 2040.

If you’re too busy to read the evidence presented below, here’s the bottom line: On a planet 4 C hotter than baseline, all we can prepare for is human extinction (from Oliver Tickell’s 2008 synthesis in the Guardian). Tickell is taking a conservative approach, considering humans have not been present at 3.5 C above baseline (i.e., the beginning of the Industrial Revolution, commonly accepted as 1750). According to the World Bank’s 2012 report, “Turn down the heat: why a 4°C warmer world must be avoided” and an informed assessment of “BP Energy Outlook 2030” put together by Barry Saxifrage for the Vancouver Observer, our path leads directly to the 4 C mark. The 19th Conference of the Parties of the UN Framework Convention on Climate Change (COP 19), held in November 2013 in Warsaw, Poland, was warned by professor of climatology Mark Maslin: “We are already planning for a 4°C world because that is where we are heading. I do not know of any scientists who do not believe that.”

And how do we respond to all this? Well, Professor Guy McPherson is given a nickname: “Doomsday Professor”. That’s that dealt with, then. Nicely trivialised. Meanwhile, we shy away from the very idea that the only thing that can help us now would be the total collapse of the capitalist economy.

If you have children, you can’t allow yourself to focus on the thought that they might not live to be as old as you are now. The information just slides off your brain and goes somewhere else.

The media help this process. The first mistake the climate scientists made was in ever referring to something called global warming. Because that has been the perpetual excuse not to pay attention, or to deny reality. But I guess they didn’t know, back in the 1960s, what the actual results of that warming would be. They didn’t have the ability to create computer models, and couldn’t take into account such things as feedback loops which increase the pace of change. They wouldn’t have been able to imagine such things as a “stuck” jet stream leading to endless waves of wet storms in the UK, or a “stuck” arctic vortex leading to astonishingly low temperatures on one coast of the USA, while the other coast suffered a catastrophic drought. Or the most powerful storm ever recorded in the Philippines, in November last year.

Do I have a conclusion? It’s always the same one: we’re all responsible. Not just in the “you voted Tory, now live with it” sense, but in the sense that we keep demanding things that the planet cannot give us. Economic growth. Pensions. New houses. Uninterrupted electric power to charge all our new gadgets. Fresh drinking water. Repaired potholes. A health service that keeps us alive into our 80s, 90s. Everything we demand, as a right, is contributing to the problem. And can we stop ourselves?