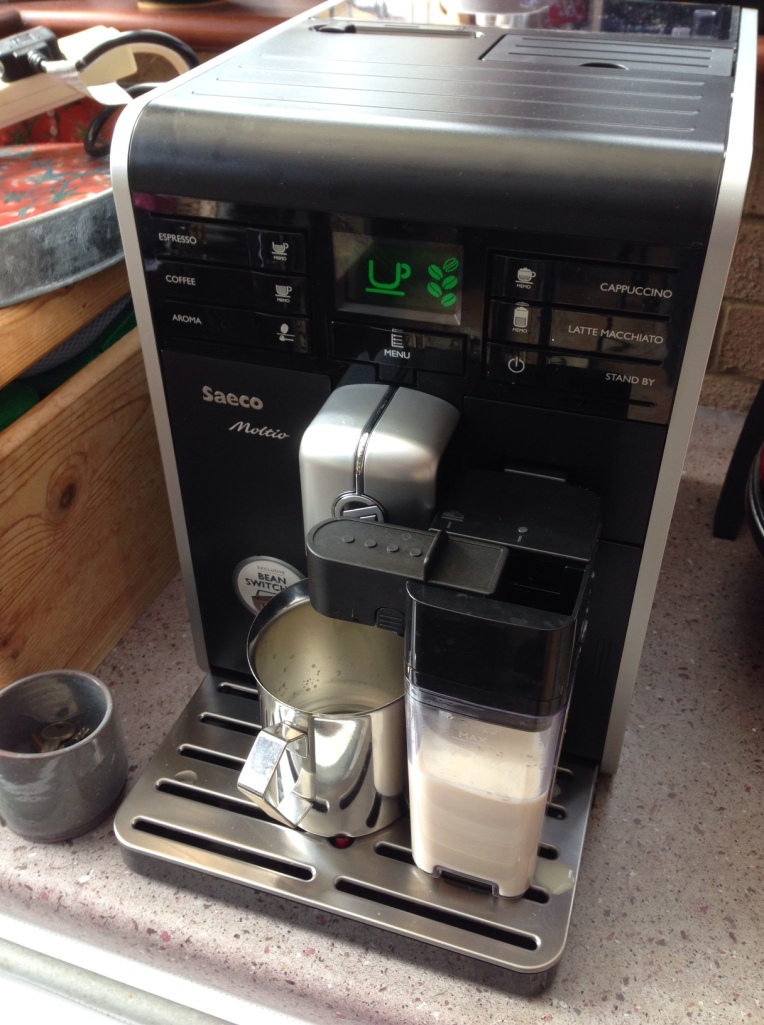 Many visitors to this blog come looking for reviews of the Lavazza/AEG Modo Mio pod machine I’ve been using for a couple of years. I still like the Lavazza system, and it does exactly what a pod system should: makes decent coffee, consistently, reliably, with a minimum of fuss.

But I have a coffee machine habit, and I was thinking of getting something new. One pod system I haven’t had is the Nespresso one, of course, and now that even British supermarkets are starting to stock third party nespresso pods, I was tempted. Then again, the key issue with all pod systems is that they’re expensive to run. Not as expensive as buying coffee in a shop, but still. I like the Nespresso hardware better than the AEG, but that’s not enough reason to swap pod systems.

I first saw a bean-to-cup machine around 10 years ago, in France, when we were invited to some friends of my in-laws to experience their wood-fired pizza oven. The visit was a perfect storm of Italian goodness in a French suburban home. The pizza oven was built in the couples’ conservatory, and opened my eyes to the superior pizza you can make if you get the oven temperature high enough. In their kitchen, they had the bean-to-cup machine, which offered the convenience of a pod system with the brilliance of coffee made from freshly ground beans.

Back then, such machines cost a lot of money. You can still spend up to £2000 on a machine: Saeco make one such, the Xelsis (http://www.philips.co.uk/c-p/HD8946_01/saeco-xelsis-automatic-espresso-machine), which includes a fingerprint recognition system that will remember up to 6 people’s preferred drinks.

So I did some research and reading. There are dozens of machine demos on YouTube, so you can really see what you’re getting before you buy. I like the Gaggia brand, but I soon discovered that Gaggia are now owned by Philips, as are Saeco, so you’re getting the same machine, essentially, whichever you buy. I could find few people with anything good to say about DeLonghi, and the expensive Jura machines also garnered a lot of bad reviews. Heston Blumenthal has put his name to a machine (which looks the business), but still requires you to manually tamp and brew the coffee as well as manually froth the milk. Not really bean-to-cup at all.

It’s not so much that I would mind this, but I was looking for a machine that would really work for the whole family. The thing about even my Lavazza pod machine, it makes great espresso (which suits me), but if you want a latte or a cappuccino, you have to deal with the feeble frother supplied with it. You can get a decent foam, but it takes a lot of practice, and one thing I’ve never been happy with is the temperature of the resulting drink. So much faffing leads to luke warm drinks. I find this is true even in the high street specialists—especially if you order three or four drinks together.

So I narrowed my search down to the Saeco range, and decided that I needed to have the built-in milk carafe rather than the pinarello frothing wand. To be able to brew up a milk-based coffee drink with a single button push is perfect for my two kids (both now keen on the coffee) and (maybe even) my technophobic wife. I went for the Moltio in the end based on its looks and its price. It lists at £750, but John Lewis do it for £650.

So it’s a beast. It is about three times the size of my Lavazza pod machine, and has been placed for now in our conservatory-cum-utility space, where it’s less likely to be in the way (and covered in bread flour).

Set up is fairly straightforward. You insert the drip tray, pour coffee beans into the hopper, fill the water reservoir, and run through the instructions for priming the system and flushing it out before it’s quite ready to be used for its intended purpose.

You get a water test strip in order to determine the hardness of your water, and you can tell the machine the result of this, so it knows when to remind you to descale it. Our water is 3 on a scale of 4 for hardness, so it could be worse. You can buy a water filter for the machine, available from Amazon, which I did, knowing as I do how hard the water is around here, and how much of my house’s plumbing is basically unusable due to scaling (we can’t even turn the cold water off at the stop cock).

The instruction manual supplied is multi-lingual, but you can find and download a single language one, which is clearer and easier to follow.

The ceramic burr grinder has five settings, which is about average. Some machines have more. They’re all a bit of a ball-ache to adjust. It comes set by default to the middle setting. I tried it on “5” for espresso, but felt the coffee dripped through rather too slowly, so I adjusted it back to “4”, where it seems to be okay. You have to make a couple of drinks before the effects of any changes you’ve made to the grind settings become apparent.

One of the things about these machines is that you can get close to perfect coffee, but you do have to experiment. There are lots of settings: “aroma” refers to the amount of beans that get ground; the grinder itself; the temperature of the water; the type of beans; the amount of water/milk. These latter can be adjusted using the “memo” function, so you can programme it to make a cappuccino, say, for a more traditional smaller cappuccino cup than you typically find in a high street coffee shop. I like the taste of coffee in my coffee: call me eccentric.

I’ve tried adjusting the amount of water used in an espresso and the amount of milk used in a cappuccino – although not very well so far. I’m still getting overspill in my small Lavazza cups when making a cappuccino. Probably my fault.

The quality of frothed milk produced by the carafe is excellent—much better than I could manage by the manual method. We’ve tried it with semi-skimmed milk, vanilla soy, and even chocolate soy. I think the best soy milk to get is the “barista” type, but not every supermarket sells it. The vanilla soy latte was really good, though the chocolate version tasted odd to me.

The machine does require regular maintenance. Obviously, the water reservoir needs to be filled occasionally. Depending on the hardness of your water, the filter will need to be swapped, too. The coffee hopper needs to be filled (this model allows you to swap beans, and you can buy a spare hopper if that’s important to you). You can by-pass the hopper with ground coffee – decaff, for example. The waste coffee hopper needs to be emptied (when the machine prompts you) and the drip tray seems to fill with water very quickly. I think it comes from the used coffee.

Note that the machine runs through a cleaning cycle on startup and when stopping – I keep a jug under the spout to catch the water produced by this.

The milk carafe can be kept in the fridge, but you should flush it out with water on a regular basis (following the instructions in the manual).

So if you have technophobes in your house, and you want them to be able to enjoy the magical coffee drinks with a single button push, there’s quite a lot you need to be doing behind the scenes in order to maintain the illusion of no fuss coffee. You have to be the Wizard of Illy, as it were.

Because there is quite a lot of fuss. I quite like this, because I enjoy a certain amount of faff when it comes to beverages. I still make tea in a teapot with tealeaves, after all.

There are four drinks you can make with one touch: an espresso; a longer coffee (I’ve programmed this to fill a small coffee cup – a lungo, essentially; a cappuccino; and a latte machiato. This latter puts in a lot more milk and less coffee, from what I can tell. I find this enjoyable with an extra shot of espresso. You can also dispense hot water on its own, and make your own drinks with steamed milk.

Anyway, I’m pleased with this so far. Don’t know what I’ll do with the lavazza machine, mind.