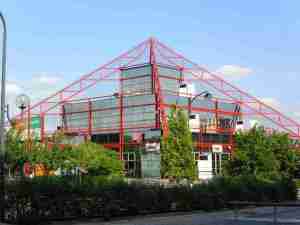 Although this was written at a later stage, on new hardware, I’m as vague on the details of this as I was on #1.

Both The Obald and MK: a Ghost Story were written on my second typewriter, a Brother Golf-ball Electric. This was my favourite of all my pre-Mac machines, and I loved being able to change the typeface by swapping out the golf-ball. I had plain text (Courier or Pica, not sure), a script, and an italic (not a true italic, but a slanted roman). This was good stuff.

I made full use of all three typefaces on the typescript.

MK was written around 1987/88 had an unreliable narrator; he’s basically talking about girls he’s been in love with, whilst pursuing a new love interest. He doesn’t tell his new girlfriend what’s on his mind. It’s coming back to me now. There was some personal history with one of his old girlfriends (more a friend-girl than a girlfriend), and some promise made when they were teenagers, a promise to always be available to help.

So I’m writing this at the time I’ve just moved in with Angela; we’d lived together for a year and then bought a house together, and almost on the day we picked up the keys to the new house, I met Nicola P., who would be a great lost love. It ends up around 230 pages, and that’s the context.

So he has this ex friend-girl-friend, we’ll call Paula, and she’s in trouble and contacts him years later. Or she’s gone missing and someone contacts him and asks him to find her.

There’s a nice thing that goes on throughout between him and his new girlfriend, where they’re lying in bed together and she says, “Tell me a movie.” Which is when he tells her the plot of The Obald, as a movie, starring Burt Lancaster, which is how I originally dreamt it.

BBC2 were showing a Burt Lancaster season at the time.

So the short version is, he eventually sorts out this Paula, and puts it all to rest, and it looks like everything is okay. Or he doesn’t sort it out, and it all turns into a tissue of lies and deceit, and he walks away from the situation, wanting a clean, Paula-free future with his current squeeze.

And he’s ended up with his new girlfriend in their new house in Milton Keynes. And at the end, they’re embracing in the bedroom, about to go to bed, and while they’re kissing, he opens his eyes, thinking of Paula.

Which was the “ghost” part of it. Heavy on the irony there.

To summarise, and be heavy-handed about it, the novel was about being haunted by your past, not being able to let go of it, in spite of the damage it does to your present and future relationships.