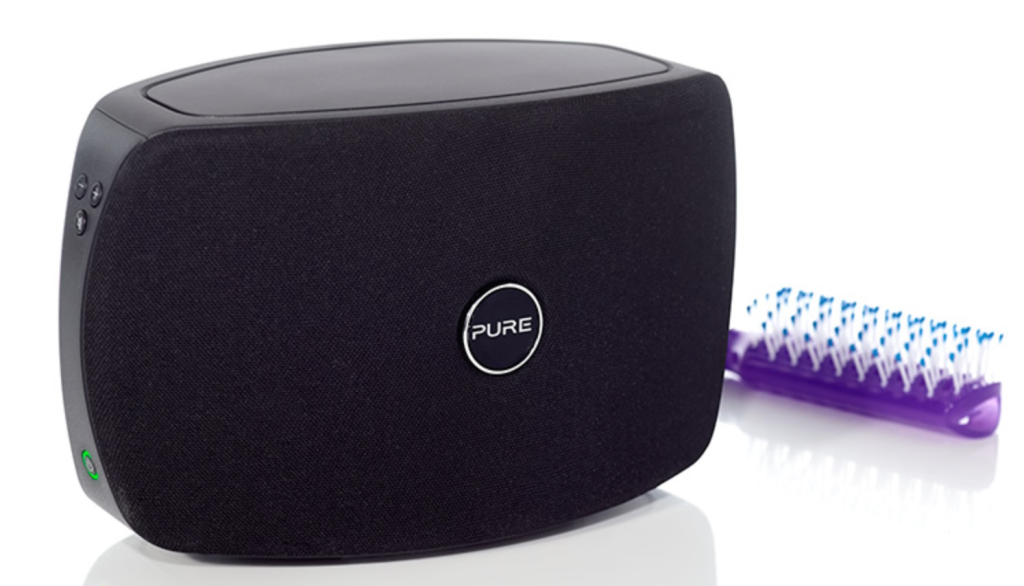 In my never-ending quest for a reasonable iPhone speaker at a reasonable price, I wandered in the John Lewis the other day to see what was available in Clearance. I noticed they had a JBL OnBeat Rumble, for example, but the thing looks HUGE.

It’s quite surprising how much stuff John Lewis seems to sell that comes back. A lot of the items had been marked as pre-owned, with no mention of the reason for their return.

There were a couple of Pure Jongo T2 speakers, for example. The Clearance price was £85. That there were two made me think that someone had maybe bought them thinking to have a multi-room setup, or a linked stereo pair. Maybe it was all a bit of a pain to set up and they brought them back. Stranger things have happened.

I went over to the ones on display and (easily) connected my iPhone to the T2 using Bluetooth and auditioned it with three or four songs from my phone. I was in a shop and it wasn’t an ideal environment, but it sounded OK. My ears officially give out at 16kHz, so I’m hardly the most discerning listener. What I look for is a decent amount of volume without distortion and without a flubby or boomy bottom end. I like the bass to sound nicely rounded and in harmony with the mid-high frequencies.

Looking at the price, I noticed that the new ones were going for £79.95, about £5 cheaper than the pre-owned ones in Clearance. John Lewis must be on a price promise, I thought. I wonder how much they’ll knock off the sale items? So I asked. They said they’d do them for £70. Well, for an extra ten quid, I decided to get a new one. I had some vouchers.

I’ve already got a JBL Airplay speaker, and a cheap ‘n’ nasty Bluetooth thing I keep in France. It was this latter I was thinking to replace. I like to use it in the bathroom or kitchen to listen to podcasts, but it’s pretty hopeless for music. The good news, straight out of the box, is that the Jongo T2 comes with a Euro adapter as well as a British one. That makes life simpler in France, where we have a limited number of plug adapters and hate buying more.

Bluetooth connection is what I wanted, because in France we have no WiFi, and are unlikely to get it any time soon. Now that the Three network is letting me use up to 25GB of data without extra charge, I’ll be happy (as long as I get some kind of coverage on our mountain).

But in the UK, I thought I’d try the wifi connectivity of the Jongo.

Oh dear. In a bid to be multi-platform, Pure don’t support AirPlay. Fair enough. They have their own Pure Connect app, which you have to download. And that’s where your problems begin. First thing it asks you to do is log in. They have some kind of music streaming service. Hmm. I’m never impressed with these. In the UK there is insufficient Country music available, so I’d rather stick with my own stuff. But 90% of the app seems dedicated to this online content. Well, dismiss that. Let’s connect the Jongo to wifi.

Like the JBL speaker I have plugged into the wall, it starts off with its own wifi network, which you have to connect to in order to configure it and enter the password for your own. Having done that, and with your phone back on your own wifi, the Jongo tries to connect to your wifi. Having succeeded in that, it immediately wants to download a software update to itself. This takes quite a long time, and the power button flashes different colours to let you know it’s still happening. I can see how even this part of the process might lead some people to just pack the thing back into its box and take it straight back to the shop. Too fucking hard.

This better be worth it, you’re thinking.

With the update installed, you then launch the app and it looks for compatible speakers. After one fail, it discovers the Jongo. Now starts the fun, as you try to figure out how to  get your fucking music playing over the air. The manual isn’t much help here. Click the mysterious symbol. You see some sort of progress thing spinning as it tries to connect. Meanwhile, the app is unresponsive. Where is your music? You have to hunt for it, ignoring all the online crap. If you go into Offline Mode, the app becomes even more unresponsive, and you have to go back into the Online Mode you weren’t using for your music to display. But the phone, even though it knows the Jongo is there and is supposedly connected to it, still can’t play music to the speaker. You get the Pure equivalent of the SBoD (or SPoD). You get a largely white screen with a play-stop button that does nothing, and volume sliders (two!) that do nothing.

Eventually you give up on the phone and try on your iPad. For some reason, this works better. Huh. Trying again on the phone this morning, still no action. Furthermore, Bluetooth wouldn’t work either. So I delete the app, unplug and restart the speaker, tell my phone to “forget” the previous Bluetooth pairing, and try again. Success. We’re on Bluetooth. We won’t bother with the shit app.

And now we know why there were a couple of pre-owned ones on sale in the John Lewis Clearance.

It doesn’t look good for Pure because it looks like these things are flaky and have problems. And it’s not because the hardware is bad, it’s because the Pure software is bad. And that’s why Apple trounces everybody in this area. Apple control the whole experience with good software.

My advice to Pure: swallow your pride, and support AirPlay.