If only, I tweeted, there was somewhere in Brugge to buy chocolate. Brugge was a one-night stop for us on the way to our place in France. Bit of a change, something different to do, a little city break on the way to our rural (and rustic) second home.

My wife spent some time looking for a nice little hotel. When she asked for help I just went straight for the Novotel. I like a chain. We’ve stayed at a Mercure once or twice, and even Ibis. I like a place that’s going to be clean, and have standard features. I don’t believe in spending too much on a place that you’re basically only going to use for sleeping and showering. On that basis, I just want a good shower and clean linen. Where better for that than a Novotel? Providing its not miles outside town on the ring road or something, it’s ideal. Not to mention the fact that you can usually book a family room for three. 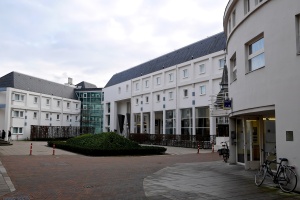 The Brugge Novotel is close enough to the city centre to be on a cobbled street (both front and rear). It also has a convenient underground car park. Step outside onto the street and you’re immediately a few metres from the first of many chocolate shops.

Brugge is, what? Ninety minutes or so from Calais. We crossed via Eurotunnel at the usual hour, which was way too early, really, and meant that we arrived in Brugge at around 7:30 in the morning, local time. Way too early to check in, and way too early for even the keenest chocolate shop to be open. Still, the car park was open, so we left the car and walked in the early dawn down to the town centre, the central square, taking our time. It was cold, really cold, and although I was wearing four layers, I was shivering. But the place was slowly waking. One of the cafés on the square had already lit its open flame gas fires and the manager/waiter was opening up, putting out the signs. I walked over to take a photo of the inviting interior and the guy beckoned us inside, where we were offered coffee and hot apple pie.

My daughter and I partook of the pie, and we sat by the fire, getting warm. It was lighter when we emerged, and you could see more of the town. Brugge is a place that does things right. The city centre is very unfriendly to the motor car, but has open arms to the bike. There are also horse-drawn buggies, which were lining up in the early light, waiting for the first tourists. These horses were still working more than twelve hours later, clopping round the narrow cobbled streets with Valentine’s couples in the back. Brugge is so cycling friendly that there’s even a free bike pump near the Post Office.

So we wandered the streets as the shops were opening and saw the market, and then, around ten, wandered back to the hotel. We were too early, and they pointed this out, but the room was ready so they gave us the key. We had a small overnight bag between the three of us and some other bits. Had a couple of hours sleep, then went out for some lunch. The daughter wanted a burger from Quick, so that’s what we did, but there was no Quick’n’Toast, so what’s up with that? In the evening, we ate dinner at a small Lebanese restaurant, which offered a lot of vegan options as well as kebabs and rice dishes. It was good. Brugge, like Amsterdam, has the feel of a proper international destination, with restaurants of many different types. There was even a bookshop with books in English, just like the one you find in Strasbourg. There are few places in France where you’d find Italian and Indian and Chinese and Lebanese and Thai eateries, and so on. Most of the restaurants were fairly full, and the Lebanese place seemed a bit neglected. Perhaps that’s because they trumpeted their vegan options in the window? Who knows? Anyway, it turned out they didn’t take credit cards – maybe that’s why we were the first customers of the night. It was full by the time we left, though, but before we left I had to hunt the streets looking for a cash machine.

It was quite hard to find the cash machine. I hadn’t clocked a bank all day. There wasn’t a bank on every corner. It didn’t feel like a place with a phone shop through every other doorway. While there were some chain stores, it had more of the feeling of a unique destination, largely thanks to the chocolate thing.

But where was Jeff? In Mulhouse, there’s a Jeff de Bruges chocolate shop, and I’ve seen them in other places in France. But not a sign of Jeff in Brugge itself. Weird. 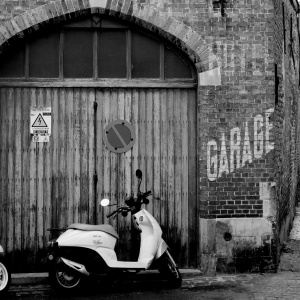 A nice place, Brugge, blessedly free of motor traffic for the most part. Pedestrian and cycle friendly, with interesting architecture. I could live in a place like Brugge, though of course you wouldn’t be living in the cobbled centre, would you? You’d be out in the modern bit of town – but even that was properly cycle friendly with separate cycle paths and stunning flyover bridges.

We drove back to France via Luxembourg, entering France near the Northern industrial city of Metz. I’m not keen on that particular French motorway. Belgium looked pretty good, though, apart from the bewildering circulation of Brussels, which I remembered from my last visit (1983) as a blighted landscape of motorway interchanges. It was there we encountered the worst of the aggressive Belgian drivers, people who would overtake you on the inside, in your blind spot, and act like you were the problem for trying to pull into the inside lane. Aggressive, or passive aggressive, seem to be the two speeds for Belgian motorists. Anyway, it felt like a bit of a trek to Auxelles Bas. The sat nav decided to take us by an unusual route, too. I didn’t have to follow, but I was getting tired and had already zoned out at a couple of junctions.

The anatomy of missing a turn is interesting. You’re tired, that goes without saying. It took me about four days to recover from these two journeys and unsocial hours. Arriving in Brugges at 7:30 in the morning and sleeping in the middle of the day created a jet lag effect. Anyway, We’re on the motorway, the one I don’t like. Partly this is because it doesn’t have the usual 130 kph speed limit. It varies between 110 and 90 kph. So there are bit where you’re doing just 90 (60 mph) on a three-lane motorway – with speed cameras at regular intervals. We were driving around Nancy, and I was watching my speed (90 kph at this point), overtaking a coach, watching that the coach didn’t pull out on me, with the sat nav’s voice muted. So I missed the instruction to turn, couldn’t see the sign (because of the coach) and ended up heading in the wrong direction. All Google Maps does at this point is point out that your journey time is half an hour longer, and it waits until you pass another junction before offering a ‘quicker’ route – back the way you came. So then you travel to yet another junction to turn around.

After all this, there was a point where – as the crow flies – we were just 28 miles from home, but still another hour or more away by the usual route. The sat nav suggested a route that went more directly, across the countryside and over the Ballon d’Alsace into Giromagny. I think the locals would reject this option, knowing that you’re going to be climbing a mountain on switchback roads with hairpin bends. But this intrigued me because I suspected (correctly) that some of the roads had been upgraded in recent years, thanks to various Tour de France visits. So although we were stuck behind a couple of slow vehicles, the route wasn’t too bad at all. Still, it was a shock to the system to climb to the top of the Ballon d’Alsace, to encounter very deep snow and winter pursuits in full flow. Skiing, snowboarding, huskies. It was foggy, too, a thick fog that clung to the hills for days on end, only clearing on Thursday, giving us just two days of lovely February sunshine, with snow drops already piercing the soil in the garden, which was still, otherwise, 50% covered in the snow that’s been on the ground since December.