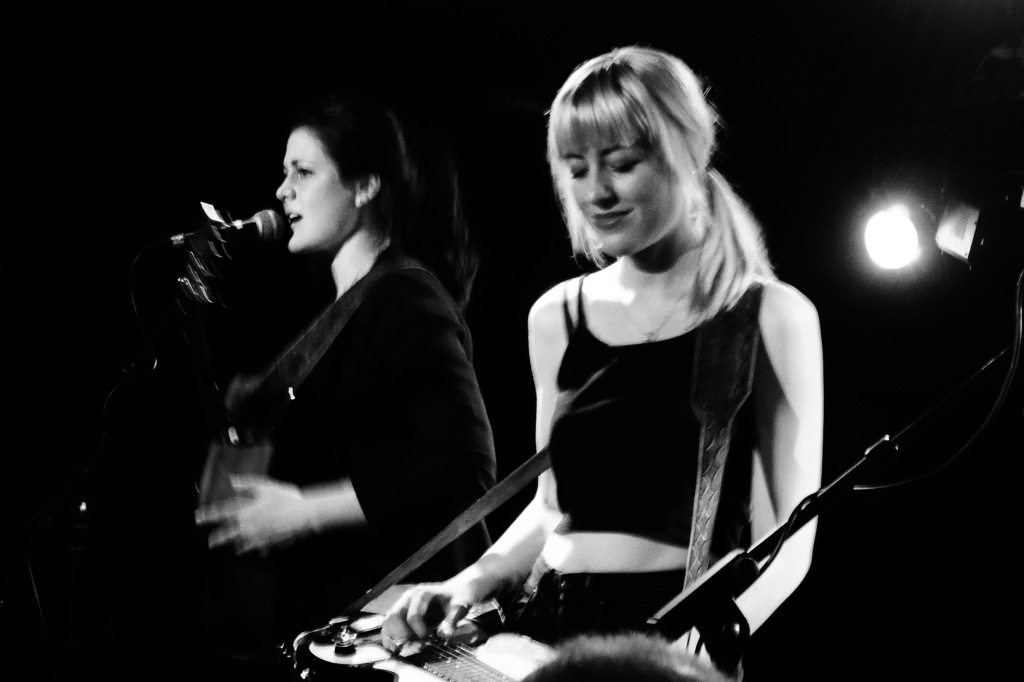 Like all my gig reviews this will doubtless turn into some kind of existential tract, so consider yourself warned.

This was my second attempt to go to a gig at the Bullingdon Arms, the first (to see Tift Merritt) having been aborted a couple of years ago when it turned out the venue was age-restricted, meaning we couldn’t take our daughters into it. My oldest daughter, who was with me for this Larkin Poe event, still hasn’t forgiven me for the half-serious discussion we had outside on the street, when I suggested options for abandoning the kids to a coffee shop on Cowley Road.

Now, from what I could tell, no age restriction was mentioned. The venue now has a separate door, around the side of the pub, so maybe that’s what has changed. Anyway, there we were.

Larkin Poe play roots music. Their first few EPs were a bit folky, a bit country, and they’ve played backup for the likes of Kristian Bush and Elvis Costello. Kin, their debut long player, now they’re signed to a label, has been described variously as ‘swampadelic,’ ‘zesty Americana,’ and ‘grungy T-Rex glam overlaid with harmonies.’

They’re touring as a 3-piece, with versatile drummer Marlon Patton adding electronic bass sounds with a foot pedal. Talk about being able to rub your stomach and pat your head at the same time.

So naturally their audience consists of grizzled old blokes.

Larkin Poe. Excellent gig. Slightly creeped out by the 5-deep throng of anorak wearing, balding men down the front.

Having read that Tweet before heading down there, and having seen a number of disturbingly similar photos of middle-aged bloke flanked by the two sisters, I felt somewhat self-conscious. I’m 52 and I was with my 17-year-old daughter, who loves Larkin Poe. Maybe 10-15% of the audience was close to her in age. The rest were your typical Radio 2 or UK roots music crowd. Anyway, not wanting to be in the ‘five deep’ crowd of grizzled and balding blokes, I stood to one side.

Thinking of it, all my life I’ve been going to gigs where the median age seemed to be 50+. So even when I was in my 20s, I found myself surrounded by ageing rockers or retirement-age country fans.

I’ve got nothing* against these people. But I do wonder about the future of live music when my daughter’s age group seem only to be interested in the huge arena gigs of the top acts, and don’t seem to bother with the local, the small, the sweaty and sultry pub back room. Because that’s where real music is, and that’s where you’re standing so close that without a zoom, you can take pictures like this.

So how was the gig? Extraordinary. These people can fucking play. Megan’s slide playing is incredible, and Rebecca’s singing voice does the whisper-to-a-scream thing to match Maria McKee. They shred, they wig out, and they rock the roof off. They also pull out surprises (if you don’t follow them on YouTube), like a segue into ‘Black Betty’ or a cover of Nancy Sinatra’s ‘Bang Bang.’ And their final encore, a tribute to those other musical siblings who sang two-part harmony, was ‘All I Have to Do is Dream’ by the Everly Brothers.

*Well, I have, a bit. I particularly have something against the people who came in just as support act Jess Morgan started her set, stood in front of me, and then proceeded to have a full-volume conversation, non-stop, until the bloke standing next to me had a word (thank you). I was desperately trying not to get wound up because I was with Chloé and didn’t want to embarrass her, but fuck. These people come out, pay for tickets, and then act like they’re sitting at home in their living room, ignoring the fact that people around them are trying to listen to the music. Jess Morgan was all right, by the way, and had a particularly good fingerpicking technique. Everybody’s a support act once, right? People talking at gigs is one of the reasons I’m ever-more reluctant to go to them.