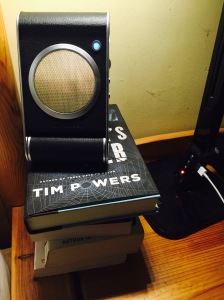 First things first: no way is this thing worth anywhere near £200, which was its list price before being reduced to about £90, which is when I bought it.

Available in several colours, this leather-and-metal object evokes nothing so much as a 1950/1960s transistor radio, if those things had been built like a brick shit-house rather than a throwaway battery-powered plastic mould with a speaker and a circuit board. It’s even only got one speaker. We’re Back to Mono and I’m not complaining (my band’s 1985 single release was proudly mono in a stereo world), but when did people stop caring about stereo? It’s name too evokes retro radio listening: Fastnet is one of the areas on the UK shipping forecast, which night owls will hear just after “Sailing By” on Radio 4 in the middle of the night.

If any of the other colours had been reduced as much, I might have gone for a more colourful option, but they were still up as high as £150, so black it was.

speakers. The situation I identified then, where there was a gap in the market between around £50 and £200 for a decent enough speaker of a reasonable size for not too much money has been somewhat alleviated. You can find something now at £80, £100, £150, all the way to the moon, but of course there is so much choice that you can never settle on anything. There are weird shapes: cylinders, flat-ish lozenges, zeppelins, domes, cubes, even some kind of strange hexagon.

What do you get? Depends what you’re after. These speakers have become something of an obsession with me. I like to stand in Fnac and audition them. They always sound better in the shop, even the little ones. I want one of these but don’t really have anywhere to put it or any way of justifying it. Or I could get some kind of digital amp with Bluetooth and plug it into my Wharfdale Diamonds, which have been sitting up in the loft for over 10 years. In the house we’ve also got a fairly decent set of cheap Edirol studio speakers which could plug into some kind of Bluetooth adapter. I’ve also got some really high end K+H studio speakers and (cough) several cheapish Bluetooth things. There was the orginal €49 I bought a few years ago in France, which is terrible really: too quiet and distorts anything above a certain volume. Things have come along: I recently bought (in my favourite shop Nature et Découvertes) a rechargable LED lamp with a built-in speaker, which is also mono and actually sounds okay, considering it too was only about €50. I’ve also got the Panasonic under-the-telly speaker, which is pretty good as a living room Bluetooth sound system.

There’s more. A couple of years ago, in the John Lewis sale, I bought a Pure Jongo, which is like a poor man’s Sonos, because you’re supposed to be able to hook several of them up together and have a stereo spread or a multi-room thing. I only bought one, and only because it was reduced. It’s wifi feature was flaky as shit, so I immediately abandoned it in favour of Bluetooth. It’s been in the kitchen, mostly, but I have a couple of problems with it. First, it’s not battery-powered, so it always needs a power socket, which is not convenient when I need both the Magimix and the KitchenAid. Secondly, it’s plenty loud (20 watts) but sounds flubby to me, with boomy bass (like all of the Pure products I’ve ever owned, actually). I didn’t say so in my review, but long term listening to podcasts means I’ve grown tired of hearing the bass of voices reverberating through the house.

Bass is always an issue with these small speakers. They try to do clever things with ports and so on, but we’re dealing with the laws of physics here, and to my ears a lot of these bassy things sound too boomy, with no definition. This is especially an issue when the majority of my listening is to speech (podcasts).

So the Jongo has been demoted, like the JBL plug-into-the-wall thing before it, and my new kitchen speaker is this portable, retro, leather and aluminium designer thing. The JBL Airplay speaker stopped working after an iOS update, which is always the danger when you marry 3rd party products with system integration. The beauty of Bluetooth, at least, is that it’s some kind of cross-platform standard.

Take it as read that fashion designers know naff-all about audio, assume this is just a mass-produced Bluetooth thing in a fancy case. What does it bring to the table?

First of all, you can bring it. Like a (hefty, solid) portable radio, you can carry it into the kitchen while you make dinner, up to the bathroom, into the bedroom, or out into your shed, without having to find a plug socket (built-in battery lasts up to 6 hours). Its Bluetooth connection is better than the Jongo: it remembers up to two devices and will automatically pair once you switch on via the satisfyingly large On button. With the Jongo, I always have to pair manually, which is a pain.

Because it’s so heavy, it’s solid and doesn’t vibrate, and I’ve noticed no distortion. It’s not very loud (the Ted Baker web site is coy about its technical details; I’m guessing no more than 10 watts, possibly less), but the thing about a portable speaker is that you carry it with you, so you don’t need to fill the house with sound. I’m listening mainly to podcasts, and it’s perfectly fine for voices, and loud enough to be heard over a boiling kettle or a mixer kneading dough.

I really like the manual controls. There’s the chunky on-off switch, but also a satisfying dial for volume, which is far better than the button-pushing you get with a lot of these things. There are also buttons for muting (for phone calls) and pairing, plus a mini-jack line input for when Bluetooth lets you down, maybe? And a built-in mic, again for the hands-free speakerphone option in the fantasies of Ted Baker-clad office drones. The hands-free phone call with my iPhone that I never use as a phone is not a scenario I will ever be in.

For music, it sounds decent enough. There’s some roundness to the bass, but there’s definitely more high end than low. Sounds all right, but it’s not for a party. And it’s mono, of course, so you won’t hear the stereo effects on those Frank Sinatra/Billy May recordings.

One quibble: it came with a carry case which is not leather (more like one of those cheap wash bags you get in a perfume gift set) and doesn’t have room inside it for the power supply, which (usefully) comes with a removable British/Continental plug.

I’m fairly pleased with it. It’s a nice object to look at and touch, and has that heft to it so it doesn’t feel cheaper. But of course, no way should you be paying list price for it. Even £150 is too much for this thing. This is a £50 speaker in a £30 enclosure, so £80-ish is fair enough.

One final note: Ted Baker got all the gadget/tech sites interested in the press release when it and the related headphones were launched, but nobody serious seems to have reviewed it. That’s because it’s only a £50 speaker, which could not possibly live up to a £200 price point.