Giving up on a book 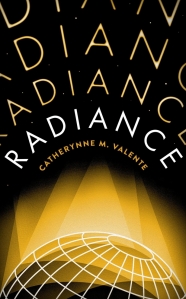 But here it is. Radiance by Catherine M. Valente was on the honour list for the 2015 Tiptree Award and I ordered it and one of the others on the list out of interest. I often do this for the Nebula and Hugo award nominees, too. It’s a good way of discovering new authors.

It’s a hard book to describe. Some would say it was batshit crazy, which I have no objection to at all. It’s set in an alternate universe, where the planets of the solar system are like countries, relatively easy to get to, and inhabitable. And there’s a film industry which is apparently frozen in the silent era (and offworld) and, the novel is built up from documentary-like fragments, piecing together the story of a female director who went missing on Venus…

All of which sound all right. You know? But I just couldn’t get into it. It has that epistolary character, like a bad 19th century novel (like Dracula, say), and the pace drags and there’s no real narrative drive, and, well, it’s all very postmodern (or it might be modern, I didn’t get to the end), but I couldn’t suspend disbelief or get into it. I kept putting it down and picking it up, and it’s been next to my bed since the beginning of April, and I kept finding other things to read, and then trying it again. In the end, I was about halfway through and still not enjoying it – not even a little bit – and so, with regret, I give up. Fuck it.

I just couldn’t get behind this Jules Verne, Edgar Rice Burrows, retro fantasy romance vision of interplanetary life, or care very much about the space whales and their milk, or the mystery of the missing director or the various other characters who have something to do with this film industry. I just didn’t see what difference it made that this was all taking place in space in an alternate universe instead of being about, say, early Hollywood and a director that went missing in Argentina or wherever.

Mixed emotions. I feel guilty and sorry for giving up, but at the same time relieved to be picking up the (2014 Nebula nominated) Golem and the Djinni instead.