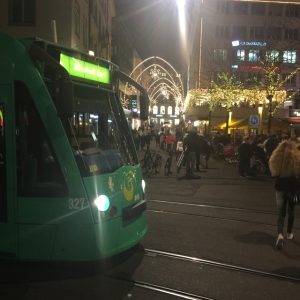 We went to Basel. Strange that we’d never been before, because it’s only 88 kilometres (55 miles) away, an easy enough drive. Closer than Strasbourg and Freiburg, about the same distance as Colmar, a little further than Mulhouse. But Basel is in Switzerland, so there’s that.

Anyway, we were thinking of going to the Christmas market in Montbéliard, which is fairly close, but also tough for parking, and someone recommended Basel instead, and an underground car park under some kind of retail space.

We didn’t need our passports. This, in spite of the fact that Switzerland isn’t in the EU, and another reminder that Britain is a shit country with a shitty, xenophobic national character and I wish I didn’t live there. Another piece of good news is that our phones (on the Three network in the UK) continued to have a data connection in Switzerland at no extra cost. The list of countries that you don’t pay roaming charges in on Three is now pretty comprehensive. So Google Maps kept working, and we sat-navved our way into the centre of Basel (Bâle in French), and parked in the underground car park.

One Swiss Franc (CHF) is worth 79 pence, so fairly comparable to the €uro (85 pence). There’s an Apple Store in Basel, so I’ve now realised we could have bought my daughter’s new laptop for 1999 CHF (£1584) instead of £1749. I guess exchange rate smoke and mirrors would take care of the rest. Anyway, some places would take €uros instead of Francs and give you change in Francs, a good deal for them.

But we weren’t there for shopping, and our only transactions were for blow-your-face-off mulled wine, pretzels, and bratwurst. We were there for the market, and the lights, and to wander the streets. I’m assuming there’s one big Chinese town that supplies all the tat for Christmas markets? There can’t be that many artisans making laser cut wooden ornaments and suchlike. We saw truffles for sale at CHF 3.33 per gram (so, um, 33 francs for 10 grams), and enjoyed wandering around the Harrods-like food hall of the Globus department store.

The Christmas market was defended by strategic concrete barriers, and I noticed the police turning away all commercial vehicles from around the area – even a van was not allowed.

Apart from that, what was most pleasant about walking around Basel was the almost complete absence of cars. Trams everywhere, lots of them, quite old-fashioned looking, but charming, and frequent. But everywhere else, you could pedestrian without being molested by the Busy-and-Important motorist types. Now, there are pedestrian zones almost everywhere, but in my experience, you almost never walk down a pedestrian precinct without having to dodge multiple delivery/service vans, and a seemingly endless procession of people who, for whatever reasons, have decided that the No Motor Vehicles sign doesn’t apply to them, and that they are therefore perfectly entitled to drive their car up and down the narrow cobbled streets. Everywhere you go, there are mini Clarksons with sharp elbows and rumbling engines, telling you that they’ll relinquish their cars when you pry their cold dead hands from the steering wheel.

The other really nice thing about Basel was that there were lots of places to sit. I mean, benches and seats and all kinds of sitting-down surfaces were everywhere. And no spluttering exhausts. Sure, your stereotype of the Swiss would have them exceedingly well-behaved, and the streets were remarkably clean and (unlike Berlin) almost graffiti-free, and there were no visible homeless people, all that, but it was just really nice to walk the streets without being annoyed by cars. And cars, as we should all by now have realised, have basically ruined everything. Without cars, everywhere is a nicer place to be. It’s just one of many reasons to look forward to the apocalypse.