The Ile-d’Yeu is a 30 minute ferry journey from the French mainland, off the Vendée coast.

The Vendée is my favourite part of France: a different kind of landscape, with (I seem to recall) the second best microclimate in France. The Cote d’Azur gets first prize for sunshine, and has the calm, warm waters of the Mediterranean and its beaches to boast of; but it also has overcrowding, endless traffic queues and nowhere to park. A few summers ago, we took a day trip to an island off the Southern coast, and encountered a fabulously beautiful beach on the clear turquoise sea which was a long but thin strip of sand — and there was not enough room on it to lay down a towel. 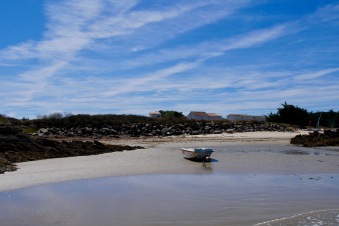 The Vendée has a long coastline on the blue Atlantic (Le Grand Large) with vast sandy beaches interspersed with rocky sections which have tidal pools full of sealife. It’s a great base for a more traditional seaside holiday, for both sunbathing and rockpool exploration, for kite-flying, beach tennis, body surfing, and more. It would also be a great base for a biology/geography field trip, what with the life teeming in the rock pools and the different types of vegetation in the sand dunes as they progress inland. Best of all, even in the peak of summer season, the beaches are not so slammed that you can’t move. You can in fact spread out without finding your face in someone else’s crotch. In the South, if you manage to fight your way through the traffic and the wildfires to get somewhere; and if you manage to find somewhere to park; and if you manage to find a postage stamp sized patch of beach to sit down on, you are also surrounded by the strutting and preening of the Beautiful People (ugly oligarchs) and their giant yachts.

I love the architecture of the Vendée: white houses with red tiled roofs, blue shutters. There are variations on this, and people paint  their shutters different colours, but the traditional Vendée house has two small single-storey sections joined to a two-storey central section. The best of them squat in the dunes, or among the pines, and the sun bounces blindingly off the white sides, and there are no gutters because there’s a collective self delusion that it never rains.

The Ile-d’Yeu has a small port on one side, several sandy beaches, and a rocky coast with a ruined castle. Like a society, it has rules. Visitors are allowed, but not with their cars. Only islanders are allowed to have cars.

I was naively optimistic about this. Far too many beauty spots are ruined by the motor car. Let’s face it: everywhere is ruined by the motor car: towns, cities, countryside. But it’s especially jarring when you visit somewhere ancient and mediaeval, somewhere quaint and relatively untouched by modernity. I remember visiting the hillside fortress village of Gordes and being depressed by the unending stream of noisy traffic. And wherever you go, its a universal truth that even the pedestrian zones, the zones pietons, are blighted by the eternal presence of the busy-and-important person who decides  they are the exception, and so you are always dodging cars and vans as they edge forward at an ironic walking pace and you are forever encountering that peculiar sense of privileged entitlement which is a constant reminder that you live in a capitalist dystopia.

So! I was excited at the prospect of an island with very few motor cars and where everyone hires a bike. An egalitarian utopia of pedal power!

Every island is a microcosm of society

But of course, was disappointed. Of course, the people with cars, the locals, the islanders, asserted their privilege aggressively and selfishly, with no sense that they were part of a society. They treated bicycles as a nuisance to be dispatched, and were they ever determined to overtake — even if there were another 15 bicycles in front of the one they passed dangerously close — even if there was another slow-moving car in front of those 15 bicycles — and in front of that car another 15 bicycles, and so on, all the way into town. It was bicycles all the way down. But no! They must get past, because such is the privilege of car ownership. And of course, the tourists, bless them, mostly unused to the cycling life, were pathetically deferential to their superiors on four wheels and simply accepted this state of affairs, while I wanted to scream at the top of my voice, vous roulez a la vitesse d’un vélo, ou vouz achetez un vélo! Often, overtaken, I would pedal harder, catch up, overtake them, and then act as a rolling roadblock, sitting in front of them with my middle finger dancing in front of their windscreen. Fuckers! It’s not that I hate motorists; I am a motorist, after all. But I hate people who think they are more entitled, and there is no escape from them, ever. Up against the wall! Oh, okay, I admit it: I hate motorists, including myself. 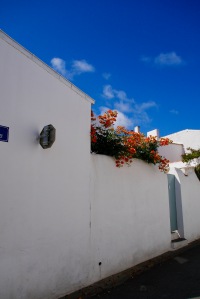 Even worse, it turned out, that as well as hiring a bicycle from one of the myriad hire shops (including the horrifically named Bi-Clown), you could also hire shonky old cars, most of them vintage Citroens and Renaults. For a mere €80 par jour, you could lord it over the cyclists like a rich second-home owning Parisienne. What a way to conspicuously consume! Belching black smoke from a shitty old chugger for a week for the price of a half-decent bicycle. And while you’re at it, park on the pavement, why don’t you?

It’s an island, so I personally don’t think longer than a week’s stay is necessary. There are only so many things to see, and the town is both small and expensive. I saw some wonderfully colourful cotton shirts, but at €70 apiece in the sale, they were beyond my means, as were most other things you saw in the shops, from tinned sardines to nautically-themed t-shirts. They did a nice line in branding: the island’s name shortened to an assertive YE on everything from polo shirts to wet bags and keyrings.

The house we were renting was a  miracle in packin’  ‘em in. Including bicycle hire, we’re talking €5000 for the fortnight, split between a number of families. The first week, three or four families shared, and then we changed over for our week with four more. Each bedroom was constructed with a mezzanine, so that a poky room for two became a poky room for four. I think there were five bedrooms and at least three bathrooms. We got an ensuite bathroom to ourselves, which was a solid reminder to me that the ensuite bathroom or toilet is an abomination that Shouldn’t Be Allowed. Not with walls that thin!

The ethos was that everybody ate together, most of the time, which led to some late mealtimes as everyone drifted in and eventually got around to lighting the barbecue. If you’ve never cooked regularly for 15 people, here’s an example: one day I barbecued 2.5kg of chicken breasts with four trays of sausages, thinking this would be an excessive amount of food. The leftovers were enough to half-fill a cereal bowl. A huge pot of moules (mussels) was accompanied by four bags of oven frites. If I had my way, we’d have done our own thing, eaten when we were hungry, and not had to deal with such catering at scale.

There was lots of seafood, on which I’m not keen. Freshly caught tuna was sliced into steaks and grilled: good, especially with my improvised sweet/sour sauce made with apricot jam, vinegar, and chilli/ginger. But the next tuna brought in was eaten raw, sushi-style. Not my thing. There were also mullet, grey and red, and other huge fish (hake, I think, merlu in French), all caught locally. I would have liked the time to cook and prepare these creatively, but they were just cooked whole and consumed in scraps by the multitude.

As for bread, apparently the local bakery produced wonderful baguettes, of which 8-10 were dispatched daily. I even found a couple of fresh GF loaves on the island, and these were much better than the vacuum packed supermarket breads.

Things you realise they got wrong in Jaws

Jaws is set on an island, and they got right the idea that the “islanders” tolerate visitors only as an economic necessity. They also got right that arrival scene: with the hordes of people arriving by ferry from the mainland. But, in reality, most of the “islanders” are just rich people with second homes. They’re visitors themselves, and they should ride fucking bikes and stop trying to lord it over the rest of us. And the arrival scene is happening all the time, every 30 minutes, another boatload gets off to stay, and another boatload gets on to leave.

Islands are hills in the sea

One difference between the Ile-d’Yeu and the mainland of the Vendée is that the island undulates a bit. Nothing too dramatic, but whereas much of the Vendée coast was reclaimed from the sea by Dutch geo-engineers hundreds of years ago* and is therefore mostly flat until you get about 15 miles inland, the island itself is a hill in the sea, which is higher in the middle, and has a rocky coast that does rise and descend steeply in places. None of this was beyond the ability of even temporary cyclists, but the nature of the bikes that you can hire made it harder than it ought to be. 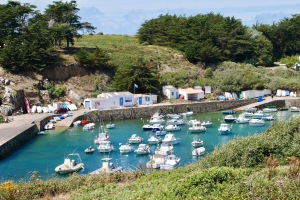 The geometry of the bikes we hired was simply terrible. Even a mild incline would cause burning pain in your backside. I don’t know: the saddle wasn’t far enough back from the  pedals or something. So although you never really cycled more than a couple of kilometres at a time, you felt it in your legs when you arrived. Our longest ride was a circuit of about half the island on a day when the Atlantic swelled and there was wind and drizzling rain. It was bracing, though the younger you were, the less fun you found it. The kids and I were dreaming of a Mars bar and a coffee, and we came across a man with a van in an isolated cove who was offering both for €1 apiece to our unalloyed joy. But the youngest kid, their cousin, went into a steep decline. Problem with a cycling holiday, though: if you’re tired and you want to go home, you still have to pedal to get there.

*St. Benoist-sur-Mer, for example, is a few kilometres from the sea, these days.