A tale of three books 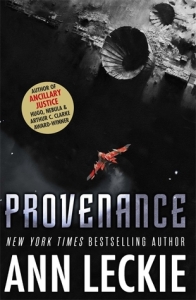 The problem with holidays, for me, is always the packing of enough books. I always seem to underestimate my requirements, even with strong memories of the last time I did so. I bought a few library books with me this time, and Provenance by Ann Leckie, which I’d been saving up for this special occasion, but I left behind the SF anthology I’ve been working slowly through since the summer, thinking I wouldn’t need it. The reading I do when I’m at work (between 20 minutes and an hour before I go to sleep at night) is both qualitatively and quantitively different than that I do on holiday, when I can fill long hours with sustained and concentrated reading.

Anyway, with a week of the holiday to go, I’ve run out, and will now turn to the books my daughter bought with her.

It has been a mixed bag. I read, for example, the sixth novel in The Expanse series of books, Babylon’s Ashes by James S.A. Corey. I find that my enjoyment of this series has been affected by my disappointment in the TV adaptation, which features wooden acting and clunky dialogue. It also suffers from being a collaboration: I really feel as if the narrative style is adapted to the convenience of the two authors. The chapters have a variety of viewpoints, and some of them, quite frankly, are unnecessary. I spent the last third of the book skipping huge, uninteresting chunks. It’s a shame: having ploughed through six novels, I now feel I’ve been wasting my time, because I probably won’t bother with the seventh.

My second disappointment of the holiday was The Silent Death, by Volker Kutscher which is the second of the Babylon Berlin books. Having watched the first season of the German TV series, I thought I was ready to plunge in, but it was a crushing disappointment. Two major problems: turns out, that notwithstanding the fascinating setting (Berlin, 1930), this is just a standard maverick cop procedural, complete with “You’re off the case!” clichés and a protagonist so infuriating that you sympathise with the colleagues who find him impossible to work with. I mean, Michael Connelly wrote the book(s) on this kind of thing with Bosch, but here’s the thing. Harry Bosch may be a stubborn maverick, but still has respect for some of his colleagues and gets along with enough of them to sustain his career. Gereon Rath, on the other hand, is just a pain in the arse. The second problem I found with this book is that the most engaging character in the TV series, Charly, the main female role, is more or less entirely absent from the book for most of its length. Furthermore, while the focus case in this is supposed to be a serial killer, the second body doesn’t turn up until over 250 pages in, which made the pacing seem off. As with Babylon’s Ashes, too, there were chapters with a different narrative point of view, which added nothing to the novel. I quickly worked out who the perp was, and the chapters from his p.o.v provided no new information, just pages you could skip.

Most unforgivable of all, the novel keeps repeating the phrase “serial killer”, which is used both by the cops and the media in the novel, and – as any connoisseur of thrillers knows – the term wasn’t coined until the 1970s. I’m hoping this is simply a translation error.

I saved the best for last. Ann Leckie’s Provenance is set in the same universe as her Ancillary series, but features a new protagonist in a different cultural milieu. As before, Leckie has fun with pronouns and gender, and manages to balance a human-scale story against a vast backdrop of interstellar empire politics which includes both different human cultures and truly alien aliens.

Ingray Aughskold is a young woman, fostered into a political family, who is trying to prove her worth by recovering some stolen antiquities. The unintended consequences of her naïve actions lead to a political crisis and unexpected legal and diplomatic outcomes.

I’m loving this new and recent trend in science fiction, led by Ms Leckie and Becky Chambers, which manages this wonderful balance between human interest, fluid gender identities, and old fashioned space opera. It feels both modern in outlook and comfortingly familiar. If you’ve been staying away from science fiction because you think it’s all faster than light travel and time dilation effects, you could do worse than read these authors. There are now four to read in the Leckie universe, and a third Chambers novel forthcoming in 2018, which will definitely be in my (much larger) summer pile of reading.