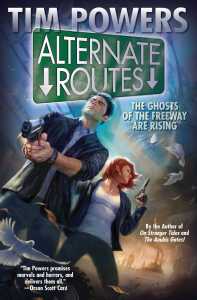 Tim Powers has been writing about the ghosts of Los Angeles since his 1990s Fault Lines series, which started with Last Call in 1992, and finished with Earthquake Weather in 1997. Back then, people were huffing ghosts like drugs, absorbing them, being possessed by them.

With his LA-set novels, Powers likes to pick a location with some weird history and weave his urban fantasy ideas into it. In the case of Earthquake Weather, he chose the Winchester Mystery House, which was built by the widow of the firearms company founder, and constructed over decades without building plans. In his more recent Medusa’s Web, he took us into Old Hollywood and Bunker Hill, and places that aren’t places populated by people who aren’t who they appear to be. To these locations, Powers links mythology and literature: the Fisher King, Troilus and Cressida, the cult of Dionysus.

The setting for Alternate Routes is the LA 405 freeway, with a side order of Mulholland Drive. This time, the fantasy elements are woven into the eddies and currents created by traffic patterns, and the ghosts are those who died on or near the freeway, and the mysteries concern what happens when you take an exit that isn’t there, or catch a voice from a car radio that you weren’t supposed to hear. The mythology is the labyrinth and the minotaur: Daedalus and Icarus.

Los Angeles is a fascinating sprawl of a city, and Powers clearly finds endless inspiration in its no-place weirdness. But this book, like Medusa’s Web (2016), feels somewhat peremptory and by-the-numbers. As if, one hopes, he’s just getting all these ideas out of his system. As a fan, I still bought this on the day of publication and read it quickly, but this novel does not reach the heights of his best work, Declare, The Stress of Her Regard, and Hide Me Among the Graves, The Drawing of the Dark – all of which have a historical setting away from the West Coast of the USA.

Terrible cover, too. I’ll doubtless come back to it to reassess, but for now I’m disappointed. 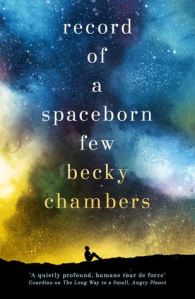 Record of a Spaceborn Few by Becky Chambers

This third novel by Becky Chambers, after The Long Way to a Small, Angry Planet and A Close and Common Orbit, takes place in the same universe, at more or less the same time as the other novels. This time, the focus is on the human crew of the Exodus Fleet, the refugees from Old Earth, who have been living on the generation ships built to flee the environmental disaster we’re currently creating. To the other alien races they’re a curiosity, sometimes viewed as a charity case, with very little to offer in terms of technological innovation.

There are several focus characters, and the chapters flip between them in a regular rhythm. One is an ethnographer from a different species, who visits one of the ships in order to learn more about the humans who have not left the fleet. Others live and work aboard ship, experiencing day to day life or going through personal crises. There’s a Caretaker, who looks after the dead as their bodies are recycled; an archivist, who is there to record the important events on board; a teenager who is disillusioned with life in the Fleet; and an engineer who faces potential unemployment due to the introduction of outside technology. All of these people lead separate lives, and have individual narratives, which gradually intertwine to become one.

And this is the genius of Becky Chambers. For a while, I was thinking that, like Tim Powers, she was producing work that wasn’t up to her best, not quite as engaging as her debut or its brilliant sequel. But then, towards, the end, I found myself reading through tears as the emotional impact of this story hit home. While A Close and Common Orbit weaves two narratives into one powerful whole, this novel takes thinner threads and delicately entwines them until you are caught in the middle of the quietly devastating web, wiping tears from your eyes.